Rules Were Made to Be Broken 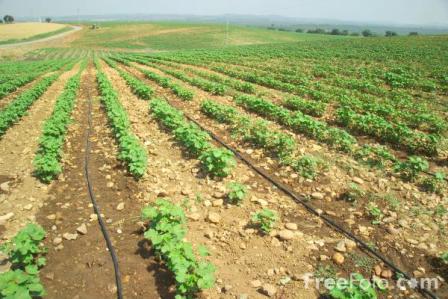 I went to work on a farm today because as a city girl, I have far too few opportunities to get dirt under my fingernails and a sunburn in the gap between my shirt and my pants (yes, I really did).  When I arrived, one of the full-time farmers showed me the row he wanted me to hoe and demonstrated how to do it.
“It’s like you’re sweeping,” he said.  “You don’t so much want to dig out the plants as just cut them off where they hit the dirt.”  As I watched the hoe scrape over the weeds, removing the leaves and most of the stems, something didn’t feel quite right to me.  There was a queasiness in my stomach and a coldness in my limbs.  It took me a minute to figure it out, but finally I put my finger on why I was upset.

“You mean we’re not removing the roots of the weeds?” I asked.

“Nope,” he answered.  “Just take out everything above the ground.”

Somewhere along the line I got it in my head that there’s a universal rule, probably inscribed on some distant sun on the outer reaches of our galaxy, or in the DNA of every living thing on Earth, that when getting rid of something you don’t want, you always, every time, forever, and without fail remove it by the roots.  You annihilate every last shadow of that unwanted thing so that it’s as if it never existed.  That way you don’t have to worry about it ever coming back.  Never ever.

The thing about rules is, unless we live in a totalitarian state, 99.5% of the ones we feel obliged by, and often resentful of, are rules we create for ourselves.  (And there are a lot of them.  99.9% of them we don’t identify as rules–we just follow them.)  We go through life having experience after experience, and eventually we’ll come upon one we don’t like.  So being the intelligent and eminently rational creatures that we are, what do we do?  We sit there and figure out what went wrong to create the predicament we would have rather avoided, and when we do, we make a rule.

One time, for example, I was out with a friend in the middle of nowhere when I was suddenly overcome with overwhelming hunger.  In a matter of minutes, I went from hungry to angry to hangry to crangry (crazy hungry angry).  My friend panicking, we searched for food but there was none to be found.  Honestly, it was a minor miracle that our friendship survived that day.  Soon after that experience, I made a rule that whenever I travel more than 10 feet from my home, I have to carry a snack in my bag to satiate the monster within.

That rule is relative harmless and has probably saved some of my more delicate relationships.  But other rules are more dangerous.  Say, for example, that at a young and tender age I share a vulnerable feeling I’m having with someone who is ill equipped to handle such delicate intimacy.  If they respond with any sort of callousness or ridicule, I may make a rule to never share my true feelings with another human being again.  It may seem extreme, but I can’t tell you how many of my own personal rules come from one or two experiences that were so difficult or intense that I would do anything to avoid repeating them.

Even when we recognize that no rule can work in every context and every single situation, breaking the rules we set for ourselves can cause us a lot of anxiety.

I had a client who had all kinds of rules for herself, and from the surface, they all looked like good ones.  They involved how much exercise she was supposed to get, how healthily she was supposed to eat, how well she was to take care of her pets, how often she was to call her mother, etcetera etcetera.  They all came from great intentions.  The trouble was, she began to feel strangled by her own rules, trapped, obligated, enslaved, and unable to see a way out.  At first it just seemed like life was holding her captive, but the rules were all her own.  And though that may not seem like a big distinction, it is when you realize that if the rules holding you captive are your own invention, you are 100% free to break them.

I myself like rules and the predictability they promise.  They offer a sense of comfort and control in a world beset by uncertainty and randomness.  But the promise they hold is illusory, and the cost to our freedom is a high price to pay.  Because while it’s great to learn from our experiences and remember helpful guidelines, we also have to remind ourselves of the purpose of our rules and recognize that sometimes the best way to achieve that purpose is to break them.  Sometimes being healthy means taking a break and sitting on my butt.  Sometimes being loving means saying something that will cause somebody else pain.  And sometimes weeds are best defeated by leaving their roots in the ground.

Rules promise security, but what actually offers the best protection for our well being is flexibility, a willingness to not know (because what was best in the past may not be what’s best now), and a trust in our ability to handle whatever surprises life throws our way.  We can start by identifying  and making conscious the rules we live by.  Naming them can help break the power they have over us.  Once we have our list, we can decide whether we want to follow them or not, and in what situations.  It takes courage to go against our guidelines, but we all have an inner rebel trying to get out, and it whispers in our ear the simple truth that all rules, no matter how good, are at some point meant to be broken.