The Adventures of Little One: An Excerpt 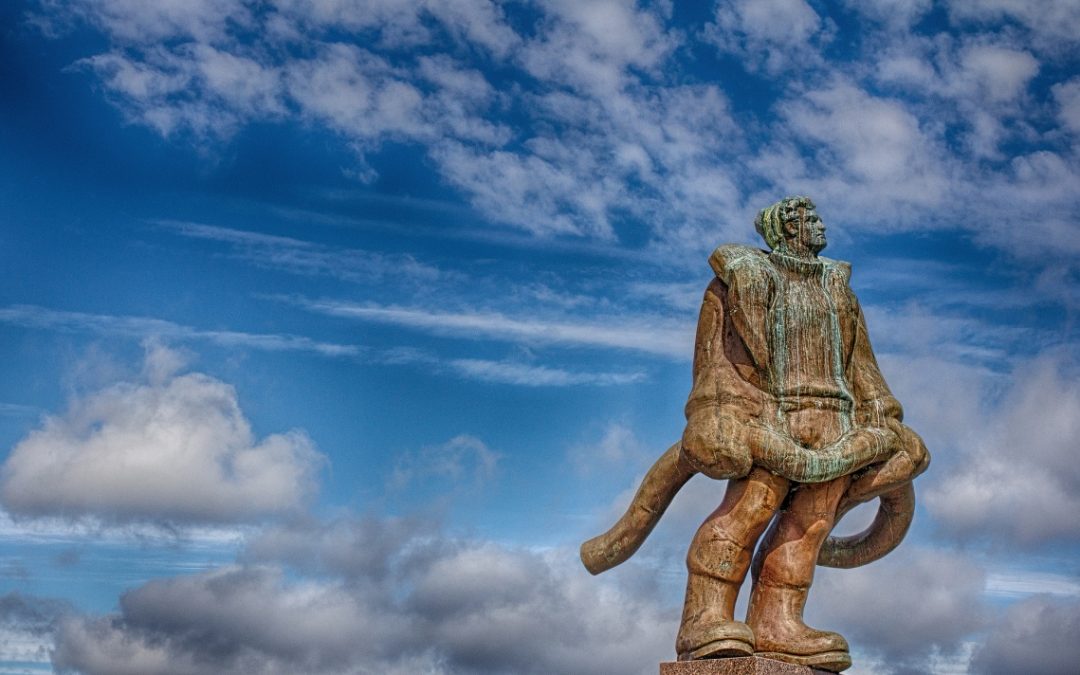 Following is the first chapter in The Adventures of Little One: Eye-Opening Tales from the First Hero’s Journey, a new book written to help anyone longing to feel a greater sense of purpose overcome the obstacles and find their way to meaningful and satisfying work.

Long ago, the people lived in a village by a lake not far from the mountains. The village and its lands were small at first, but eventually the leaders of the village foresaw that if they cut down more of the surrounding forest and expanded their fields, they would have more food to eat and more fibers with which to make clothes and baskets.

So they did. The expansion created much bounty for the village, and at first the villagers were happy. They enjoyed fuller bellies and warmer clothes, and all was good.

But better health for the villagers meant more children, and before long food and fiber began to be scarce once again. Enterprising and resourceful, the villagers again expanded their fields, and once again, for a time, all was good.

Until the next generation of children came and with it more hungry mouths to feed. And the children who grew up in a time of plenty now needed more and better food to be satisfied. So the villagers cut down more trees and prepared more land for sowing. This time, however, the new land under cultivation was not as rich and required more work. So the villagers had to labor from sunup until sundown and sometimes even longer in order to coax the harvest they wanted out of the land. They didn’t mind at first, but after a year or two laboring day-in and day-out in this way, they began to become dissatisfied.

Little by little, the dissatisfaction spread like a disease until before long everyone had fallen ill. Soon nobody was gratified and the Great Dissatisfaction had begun. No longer content with the food they had or the clothes they wore, the villagers worked harder and longer to expand the fields, increase production, and keep up with their desires. If they could just get a big enough harvest, they thought, the Great Dissatisfaction would end.

It was around this time that Little One was born.

They called him Little One both because he was the youngest boy in his family and because he was small. He was scarcely larger than his younger sister, who was a full two years younger than him, and his arms were no bigger round than a field snake.

His brothers delighted in reminding him of this because they knew he was terrified of snakes. He was terrified of many things, but it was his fear of snakes that his brothers enjoyed most. It was a common occurrence for them to throw a rope over the back of his shoulders, scream “SNAKE!” at the top of their lungs, and guffaw as he danced about, trying to get the rope off his back.

Little One had always been different than the others.

While his family loved working in the fields for 16 hours a day, Little One grew tired and restless. He loved to work for the morning and the early part of the afternoon. He enjoyed tending the fields, nurturing the little seeds with water and sunlight. He got excited when they first broke through the earth and proffered their delicate, hopeful leaves to the sun. He grew proud as they stretched their limbs into new territory and grew strong over time, eventually turning this strength into flowers and fruits that they generously shared with the world.

But by mid-afternoon, Little One was tired, restless, and irritated. His eyes would wander towards the mountains, and he longed to see out what lay beyond.

His family had tolerated this while he was still a child, but once he reached adulthood, they couldn’t understand his reluctance. They told him he was lazy, weak, and selfish. He did his best to stay with them morning until night, but it was torture. By mid-afternoon, his whole body would grow heavy, his eyes would start twitching, and a tightening ache would close in on his chest and threaten to strangle him.

There were other differences too.

Nobody else in the village wondered what lay beyond the mountains. Nobody had ever even ventured to their feet, let alone climbed their peaks. Nobody else was scared of insects, darkness, large animals, storms, and the possibility of drought. They didn’t spend time worrying about these things or jump back in fear every time something moved unexpectedly in the bushes.

And nobody else cried when an animal was killed, even a spider that had accidentally wandered into enemy territory.

So Little One spent lots of time alone, wondering what would fill the void he had begun to feel in his chest, beating its dark wings against the soft wall of his heart.

And then came the day when everything changed, when Little One saw the snake.

He had been weeding around a group of tomato plants and noticing how their leaves were yellowing, their limbs wilting, and their trunks listing ponderously to one side. It was as if the burden of their fruit was weighing on them more heavily than before.

“They’re tired,” came a voice from out of nowhere. “The soil is no longer giving them what they need.”

Little One looked around him to see who was speaking, but he saw no one. Then he felt something touch his ankle and looked down to see a large, brown snake with a diamond-shaped head making its way across his foot.

Little One screamed and stumbled backwards.

His eldest brother was not far away and ran over. “It’s a rattler!” he yelled, and another brother had soon run over carrying a shovel. Before Little One could say anything, the eldest grabbed the shovel from his brother’s hands and ran the pointed head deep into the earth. The snake’s head fell on one side, and its body went limp on the other.

Little One suddenly felt an ache in his chest so deep he thought his heart might be swallowed whole. His second brother picked up the shovel and turned to leave. “You’re welcome,” the eldest one said, as they both laughed walked away.

Little One sank to his knees. The snake’s lifeless eyes stared up at him, its mouth open slightly as if to ask how he could let this happen. Little One couldn’t feel the ground beneath him as he hurriedly scooped dirt over the body of the snake. He could no longer see anything except the dark, sorrowful eyes slowly disappearing beneath clumps of reddish soil. It wasn’t until he saw a drop of water land on the newly turned earth above the body of the snake that he realized he was crying. He wiped the tears away and silently hoped that nobody had seen.

That night the snake visited him in his dreams. He dreamt he was wandering through the woods for hours, not sure what he was looking for, when he finally heard a soft hissing to his left. He turned, and there it was—the same snake his brother had killed that day.

“I’ve been waiting for you,” the snake said. “You took a long time to get here.”

“Why?” Little One asked nervously. “What do you want?”

“You’re not meant for thissss,” the snake continued. Its eyes were dark but didn’t seem angry. “You’ll never be happy this way.”

“What do you mean? Of course I will, as soon as the harvest comes in. I planted an extra big crop this year.” But the last words died on Little One’s lips and he immediately knew that they weren’t true.

“Yesssss, that’s better,” hissed the snake. “You can sense there’s something more.”

“Something is calling you.”

Little One considered this. He could feel a slight tug on his heart, as if it were being drawn towards something just beyond the horizon. “What is it?” he asked.

“That you’ll have to discover for yourself. You find it in the searching.”

“And where do I search for it?”

“What does that mean?” asked Little One.

And then Little One woke up.

It was just a dream, he told himself, and prepared to go to the fields.

But when Little One reached the fields that day, the ache in his chest grew so intense that he could barely breathe. It felt like his heart was being crushed by a vice. He tried to work but could barely stand up. When he left early for a lunch break, he found something curious. Each step he took towards his house lessened the pain in his chest and allowed him to breathe a little bit more.

Back at his home, Little One went to get food. When he reached down to pick up an apple, a snake’s head suddenly appeared next to his hand.

Little One stumbled backward. He went to the bedroom and saw a snake on his bed. His heart in his throat, he looked at the ceiling. There were snakes hanging from all the rafters in the roof.

Little One had never been more frightened in all his life. But beneath the fear, he could also feel a slight movement in his chest, like something within him was made of steel and was moving towards the magnetic pull of the mountains beyond. He was suddenly aware of a strong desire to see what lay beyond the peaks.

He could hear the snake’s words in his ear: “Something is calling you.”

He also didn’t know what he was looking for. Who or what was calling him? What did they want from him? He had no idea.

What he did know was that he had to find out. If the snake was right about listening, then he was pretty sure whatever it was lay in the mountains beyond.

He packed his things while he waited for his family to return from the fields. The snakes were gone, with only a rag on his bed to remind him of their presence. When his family returned and he told them his plans, they were shocked and didn’t understand why he would abandon his fields so near harvest time. They were angry that he wouldn’t be there to help them.

Little One felt a twinge of sadness about this. He was also terrified of the road ahead, as he had no idea how long it would be or where it would pass. He was thinking maybe he had made it all up, he was being irresponsible and impulsive, and it would be best to stay. That’s when his sister pulled him aside.

“Go,” she said. “They’re just sad. They don’t know it, but we need help. We’re sick, and we don’t yet realize it. Go. Find what is calling you. Perhaps it can help us as well.”

That was all Little One needed. He smiled, kissed her forehead, and said goodbye. He picked up his bag and walked out of his home, starting down a path he had never been down before. He walked away from his fields, away from his village, away from everything he had ever known.

So began the journey of the first one of us to answer the call.

Want to know what happens next? Click here to buy your copy of The Adventures of Little One and find out.